MANY thank yous to everyone who has already snagged a copy of The PreGame Ritual. For those of you who are still thinking about buying, here’s another sample to entice you. 🙂 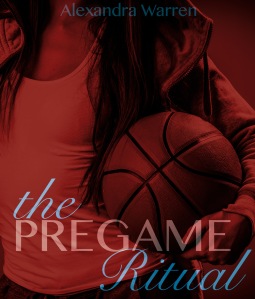 I couldn’t believe what was happening but I knew it was real.

In no time at all, the bill was paid with our entrees in to-go boxes and we were dashing through the streets, trying to get to my apartment as soon as possible. Miles kept his hand on my leg the whole drive, using stoplights to tease me by skimming it up and down my thigh. Even that little gesture was enough to get me fired up, ready for whatever our night would turn into.

When we finally did make it to my apartment, Miles parked his car in the lot reserved for guests before we both hopped out and started running towards my apartment. He chased me all the way to the door with tickles and made me fumble my keys when he held me from behind and started kissing me on my neck.

He didn’t stop his pursuit as he responded, “Hallway it is then.”

“Alright, alright. Hurry up though, ma. My hands have a mind of their own,” he said, smacking my ass as I bent over to pick up my keys. I giggled, dropping them again on purpose. “Ava…quit playin’.”

“Anxious is an understatement. Now open this damn door before I ram through it like a SWAT team.” I laughed him off, turning the lock over and opening the door. Since it was the weekend, I expected it to be empty. But low and behold, Avery was sitting right on the couch with the lamp on reading a magazine.

Ava knows that she’s the best girls basketball player in the country at the collegiate level.

She knows that she’s going straight the pros once her senior season comes to an end.

And she knows that finding a man is the least likely thing to happen while she’s chasing that dream.

That’s until she meets Miles.

A freshman phenom who has no idea what college life is like but is in for a red-headed surprise with a mean crossover.

Their chemistry is a given, but will age be more than just a number?

Or will the pregame ritual be enough to even the score?