Our last Teaser Tuesday before Distracted comes out!
And I’m superrrr excited for you all to read it.

But here’s one last hit to get you pumped for December 19th!

“You and your man should come to the game tonight.”

Bryson spoke the idea so casually as if it was hardly possible that I’d subject myself to such torture. It was already plenty for me to be looking at his forever shirtless frame as he packed his duffle bag. The last thing I needed to be doing was seeing him all sweaty in live action.

“We can’t. We already have plans,” I lied as I diverted my eyes elsewhere.

He stopped, peeking up at me with a smile as he said, “No plans are bigger than courtside seats.” Courtside? “Matter of fact, why don’t you call your man right now and tell him the news.” I thought it over, knowing Landon would probably kill me for turning down the tickets. But I had to stay strong.

“Our plans are pretty important.”

He eyed me again before he walked over to where I was standing and snatched my phone from my hand. I didn’t budge, knowing he wouldn’t be able to access anything without…

I crossed my arms over my chest as I protested, “I’m not telling you.”

He stepped closer, his bare, tattooed chest only a few inches from mine as he asked, “Kennedy, do you want me to tickle it out of you? Kiss it out of you? Lick it out of…”

He laughed, typing it in and surely scrolling to my call log. “What is that? The day ol’ boy proposed to you?”

It was a shame that I didn’t even remember that exact date, but I quickly answered him. “No. It’s my birthday.”

He stopped scrolling the second he realized what I had said. “Wait a minute. 0315. March 15th. That’s today! Kennedy, it’s your birthday and you didn’t tell anybody?”

I brushed him off, knowing it wasn’t as big of a deal as he was making it out to be. “Who tells people it’s their birthday? Like… you really thought I was just gonna come in here and announce something like that? That’d be weird.”

He still didn’t look satisfied as he asked,  “How old are you?”

“Twenty… five.” I cringed saying it outloud. Surely I was engaged, had a great job with benefits, a decent place to lay my head at night, and a savings account; but I hardly felt like I had my shit together enough to be that old.

“Really? I thought you were older than that.”

He only shrugged, going back to his packing as he said, “I don’t know. You’re just so… mature. Responsible. Uptight.”

My attitude remained. “Uptight? I am not uptight.”
He disappeared into the closet, grabbing a pair of tennis shoes, before he spoke again. “Kennedy, let’s be real here. You’re not exactly a thrill seeker. You play it safe. You calculate your moves. You’re thorough. And there’s nothing wrong with that. It’s just not very… twenty-five ish.”

I crossed my arms over my chest, feeling the need to defend my morals. “It is when you’re not making millions. Not all of us can throw our lives away at the expense of fast cars and faster women.”

Now he was the offended one, biting the inside of his cheek before he piped out, “That’s what you think I do?”

I challenged him, “That’s what I know you do.”
He took a few steps closer to me as he asked, “What about my charities? Annual events in the community? Community service partnerships?”

I brushed off the name dropping. “For every one of those, there’s probably three whores you left in each city you’ve visited. I know your type, Bryson. I’m no fool.”

He knew I was right, so I was surprised when he replied, “Kennedy, I’m young. I’m single. Of course I indulge. But what’s your excuse?”

“My excuse? My excuse for what?”

He covered the little space left between us, getting right in my face to ask, “Your excuse for being twenty-five, and responsible, but still wanting to risk it all for a chance with irresponsible, reckless ass me?” 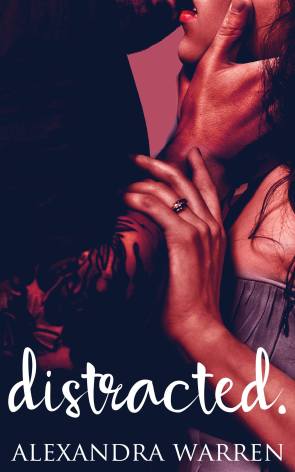 Bryson is a ladies man by nature.

And why wouldn’t he be?

And he’s fresh off of a record-breaking second year of professional basketball with his whole career ahead of him.

So when he meets Kennedy while interviewing for a new stylist, of course he wastes no time going after her.

Until he finds out she’s engaged.

And even though he knows how wrong it is to be so damn attracted to a taken woman – has already learned his lesson when it comes to taken women – he can’t help but be drawn in by her captivating persona of innocence mixed with a hint mystery.

But when Kennedy finds herself in the same predicament, caught completely off guard by Bryson’s charm and sex appeal, the line between attraction and distraction suddenly becomes a blur.

Who’s really the distracted one?