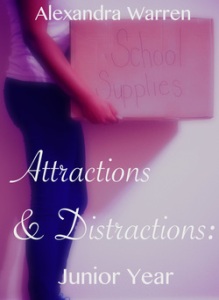 This time next week, Junior Year will be out on Amazon (as long as they aren’t on games lol)! But until then, here’s the first page of the book for Sample Sunday. 🙂
alexis.

“Babe, you gotta believe me.”

I was trying my best to wrap my head around what was happening even though the pounding of my heart and the sweat accumulating in my palms were making things ten times harder to process.

I had literally just gotten back to California.

Ready to take on another school year.

Ready to move into my new apartment.

Ready to enjoy some blissfulness with Jaden.

And someone had anonymously sent me a picture with their mouth wrapped around his dick, implying that they had kept him busy while I was home for the summer. They called themselves, “My worst fuckin’ nightmare” and no matter how much I tried to fight the sentiment, it was definitely ringing true.

“Jaden, don’t try to fuckin’ play me. I know your dick and that is definitely your dick.”

“That’s gotta be somebody from the past Lexi, I swear. I would never do that shit to you. I mean, I wasn’t the most virtuous dude before I met you so it could be a number of people, but that shit definitely wasn’t from the summertime.” I really didn’t know what to believe. Jaden had always been honest with me about things, but I knew he wasn’t the most honest person when it came to his previous relationships so maybe those bad habits were finally starting to surface. My face was frozen in a thoughtful scowl as I tried to digest the last thing I expected to see when I opened the message in the first place. I must’ve stayed in my own head for too long as Jaden piped out, “Babe, please talk to me. Tell me what you’re thinking.”